The W211 Mercedes is a great chassis for a road trip. It may not have razor sharp handling like some
other cars, but that doesn't matter when you're primary concern is covering highway miles quickly, and
comfortably. I recently took my 15 year old 2004 E55 AMG on a road trip to the Great American
Outdoor Show in Harrisburg Pennsylvania and realized once again, just how much I love that car.
Starting in Western PA, the trip was a little under 400 miles round trip. I drove out after work on a
Tuesday, attended the show on Wednesday, and drove back on Wednesday evening after the show. And
the car was filthy after this trip. 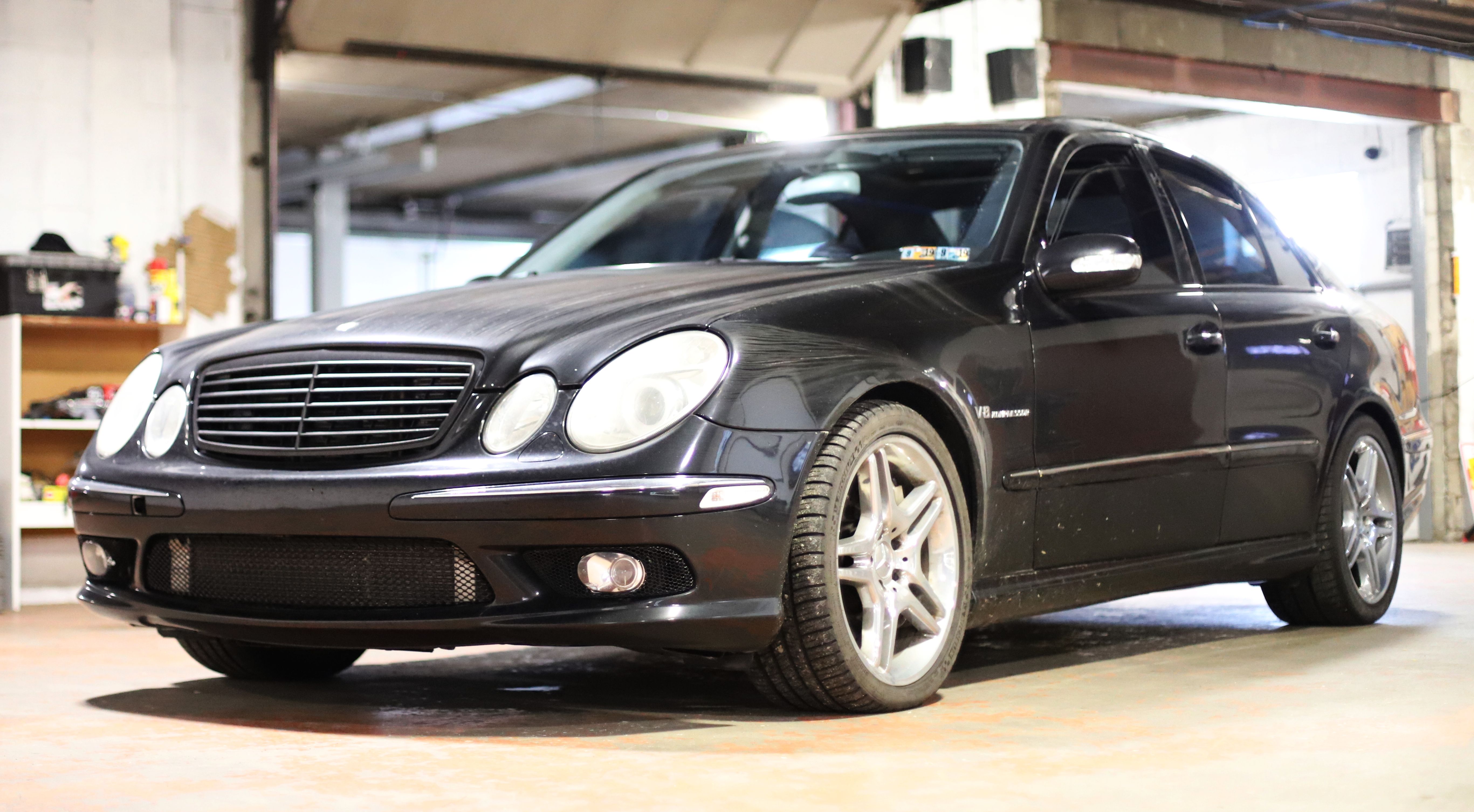 It did look a little out of place in the parking lot at the show, but it was still the best car for the trip. 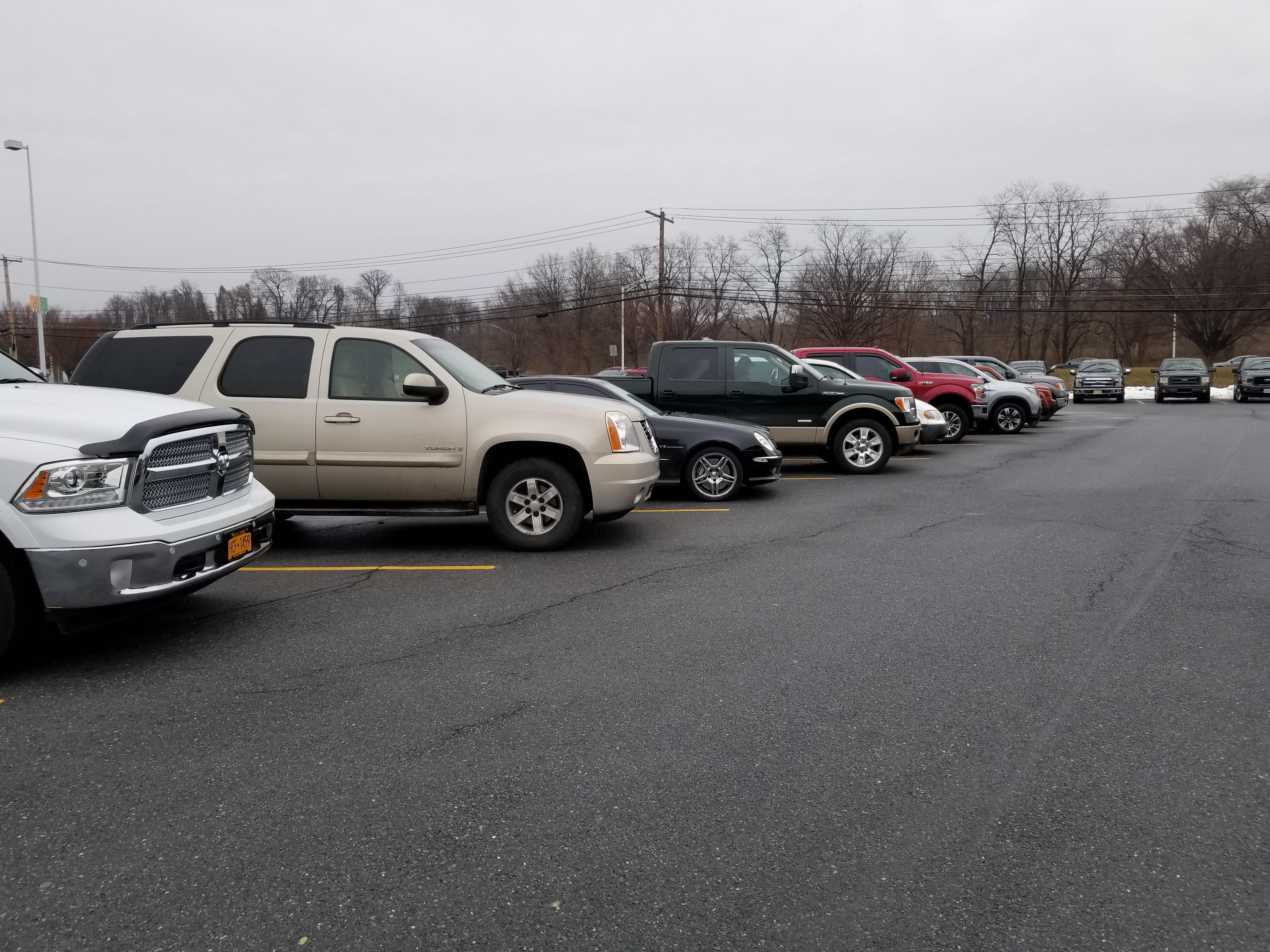 I have driven many cars, and the E55 is one of the best highway cars I have ever driven. The air
suspension is not ideal for the Nurburgring, but it does provide a fantastic ride over the road. The
supercharged V8, despite being 15 years old, runs like a top, and lets you pass basically anything on the
road. That is true on a sunny summer day, but even moreso on this overcast trip with nearly constant rain,
and a lot of left over dirt from the salt deposited on the road no less than a week ago. The shiny, speedy
cars are few and far between on days like this.

It is so quiet inside this car at highway speeds. I'm sure a Bentley is quieter, but I'm not sure my ears
would notice the difference. They certainly wouldn't be as pleased with the sound decrease as my wallet
would be with the price increase.

The car averaged over 20mpg on the highway, but under 20mpg overall because it drops quite quickly
when you are in traffic or racing between the redlights on a secondary road. 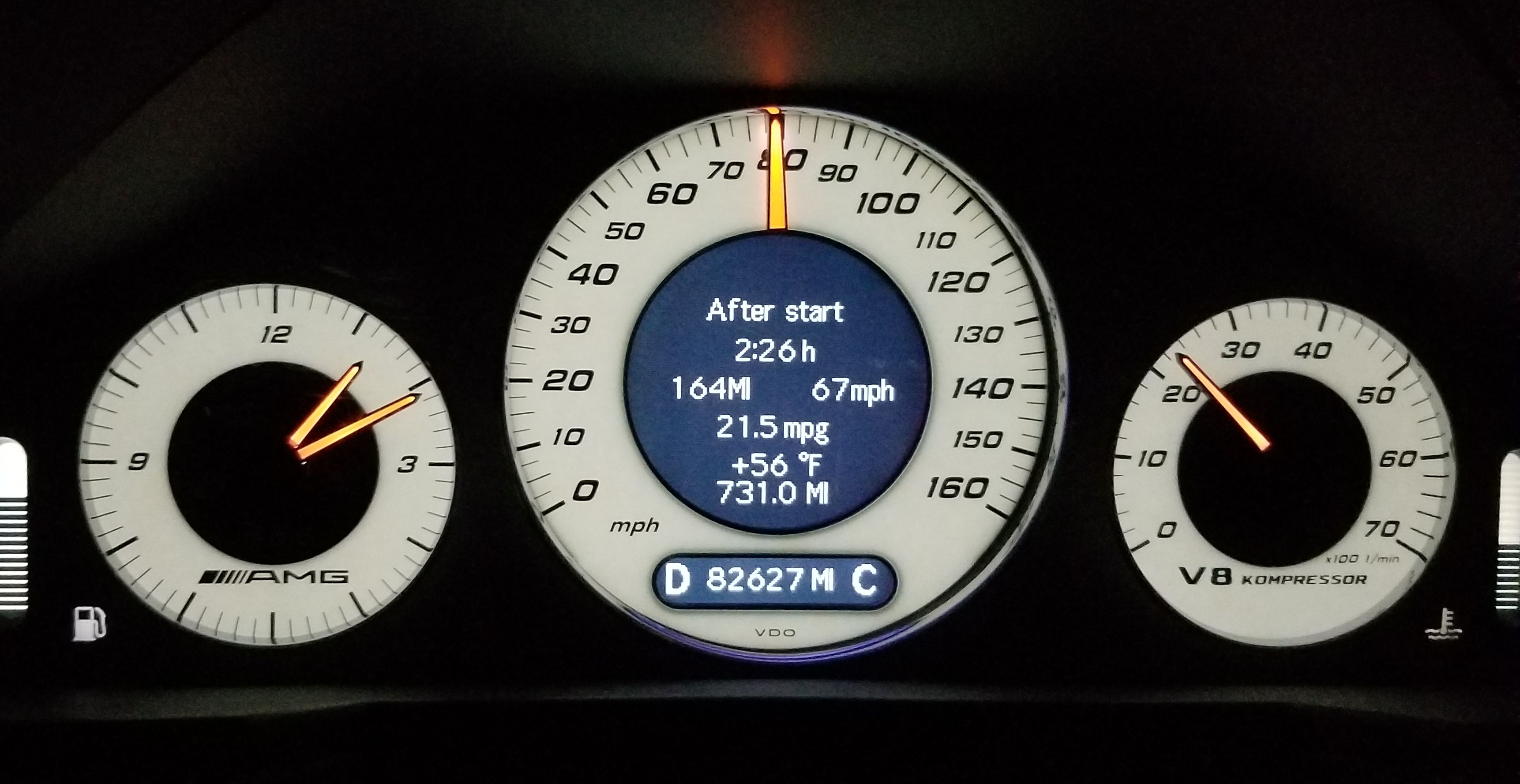 There are plenty of cars that could have done that trip, nearly any car made in the last 20 years would
have been fine, but there is something special about tearing up the highway in a W211 E55. Anything
newer, or with a higher resale value, would make the driver a bit more nervous when the 18 wheeler
catches a gust of wind, his tires cross over that white line, and the left over salt, grit, grime, and rocks are
thrown into the air at 70mph. The E55 has already taken the brunt of the depreciation, a few more nicks
and scratches aren't that big of a deal.

And although it isn't the ideal car for a track day, the tires and suspension are more than adequate to give
the driver extreme confidence in the winding hills that cross the Appalachain Chain on the PA Turnpike
between Somerset and Carlisle.

The brake-by wire pedal feel is not perfect, but honestly it is better than most cars that are a decade
newer. MB was head of the game with that system.

A few years ago, just after purchasing it, I personally piloted this car to a low 12 second 1/4 mile pass. I
may have hit the 155mph electronic limiter once, perhaps.

There are faster cars, there are better handling cars, there are more luxurious cars, and there are more
technologically advanced cars. There are also cheaper cars, but at this point in time, it is hard to name a
single car that can be purchased for the current price of a W211 E55 that is superior to the W211 E55 in
more than 1 or 2 of those categories. And I often say that any time I drive one of my cars after a period
of driving other cars, I immediately fall back in love with the car all over again. This is why I have too
many cars and find it so difficult to sell them. Almost every time I think about selling a car, I wash it,
drive it, and decide I like it too much to get rid of it. Jay Leno's collection makes perfect sense to me, if I
had his finances, I'd probably have a similar collection.

Sure, I look at the W211 E55 through rose colored glasses because I have owned this one for close to 10
years, and it still has under 100,000 miles. It has nearly zero mechanical faults. The only things not
working on this car are the home-link garage door system and the automatic unlocking device built into
the driver's door. So I need to keep a $15 garage remote instead of programming the in-car system, which
most people do anyway. And to unlock the car, I have to hit the unlock button on the remote. And if I
really don't want to get the key fob out of my pocket, I can just open the rear door, and the car
automatically unlocks all 4 doors.

And there is one other reason I love this car, and this era of cars. In 2004 most manufacturers were
already able to extract massive amount of power from engines, while maintaining respectable fuel
economy and excellent reliability. But it is just before all the "modern tech upgrades" that are often also
major annoyances. This Mercedes doesn't beep or ding at me incessantly like new cars do. It doesn't care
if I wear my seatbelt. And if I'm just warming up the car or moving it in the driveway, I don't even think
about putting on my seatbelt. I am forced to hear an obnoxious chime in most newer cars if I do this. It
doesn't care if I change lanes without signaling, it doesn't care if I approach another car briskly, and best
of all 100% of the power is available 100% of the time. Most newer cars have some menu, button, or
other procedure required to get the full advertised power output from the car. This is not true in the E55
AMG, and it's not true in many 2004 cars, just push the pedal and get all of the power in cars of that era.
If you are in the market for a highway destroyer, and you can find one in good shape that has been
maintained by the previous owner, the W211 E55 AMG is a hell of a car for the money.
Thanks for reading.